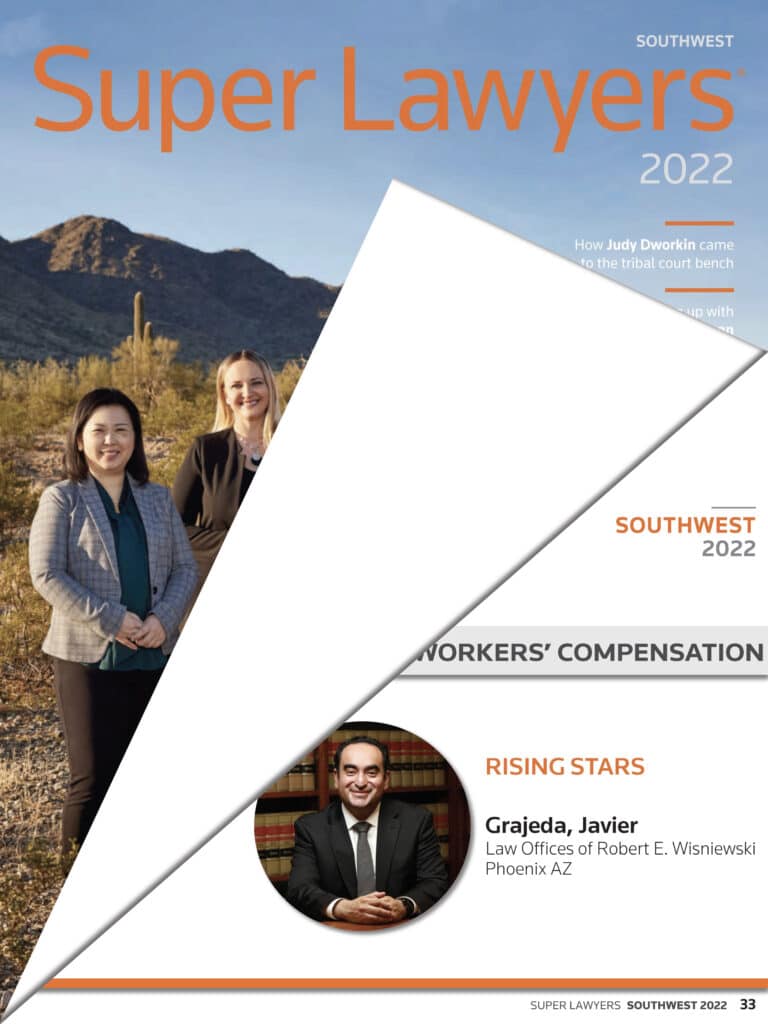 The Law Offices of Robert E. Wisniewski is proud to announce that attorney Javier Grajeda was named a Rising Star among workers’ compensation lawyers in the Southwest by Super Lawyers for 2022. This prestigious recognition is one of the most sought-after titles among lawyers.

Super Lawyers is a rating service of outstanding lawyers from more than 70 practice areas, known for its thorough evaluation and selection process. They choose attorneys using a multiphase process, which involves peer nominations and independent research to evaluate attorneys on 12 indicators of peer recognition and professional achievement.

According to the Super Lawyers website, their objective is to “create a credible, comprehensive and diverse listing of outstanding attorneys that can be used as a resource for attorneys and consumers searching for legal counsel.”

“I feel honored to be named a Super Lawyers 2022 Southwest Rising Star,” said Grajeda. “I have the privilege to work with exceptional peers in the Arizona workers’ compensation field, and it is tremendously rewarding to be recognized by them.”

Growing up in Los Angeles, CA, Grajeda worked in his family’s landscaping business, where he learned the value of hard work and first became interested in workers’ rights. Javier is now a Certified Workers’ Compensation Specialist under the Arizona Board of Legal Specialization and a devoted advocate for injured workers who need a voice.

As a 1st-generation college student, Grajeda received his bachelor’s degree from the University of California, Berkeley and his Juris Doctorate from the Sandra Day O’Connor College of Law, Arizona State University. He’s also a graduate of the State Bar of Arizona Leadership Institute.

Grajeda was admitted to the bar in 2010 and has since served on numerous committees. He’s a member of the Bench and Bar Committee and the Arizona Association of Lawyers for Injured Workers (AALIW), where he serves as treasurer.

His fluency in Spanish has allowed Grajeda to serve on the Board of Los Abogados, Arizona’s Hispanic Bar Association. He’s also a member of the Hispanic National Bar Association (HNBA) and the Workers’ Injury Law & Advocacy Group (WILG). He has published works and lectured on the issue of undocumented workers’ rights.

Grajeda joined the Law Offices of Robert E. Wisniewski in 2019, where his dedication to assisting injured workers has remained steadfast. He consistently secures maximum workers’ compensation benefits for his clients.

“Being selected as a Super Lawyers Rising Star not only reminds me to take stock of my professional accomplishments but inspires me to strive for continued growth as an attorney for the benefit of the workers I represent.”

In addition to being recognized by Super Lawyers as a Southwest Rising Star in workers’ compensation law, Grajeda was also recognized by HNBA in 2021 as one of their Top Lawyers Under 40.

The Law Offices of Robert E. Wisniewski would like to congratulate Grajeda on these prestigious recognitions of his accomplishments.

If you or a loved one has been injured on the job and need an experienced workers’ comp attorney on your side, look no further than the award-winning Law Offices of Robert E. Wisniewski. Contact us today for your free consultation.

Many thanks to you and your staff!
Workers Compensation  |  Phoenix
Workers' comp
"I was injured at work in 2009. Over my 10+ years of representation by Bob, I've had multiple surgeries and ..."
T. M., Verified Customer