Can Workers’ Comp Insurance Companies Spy on You? 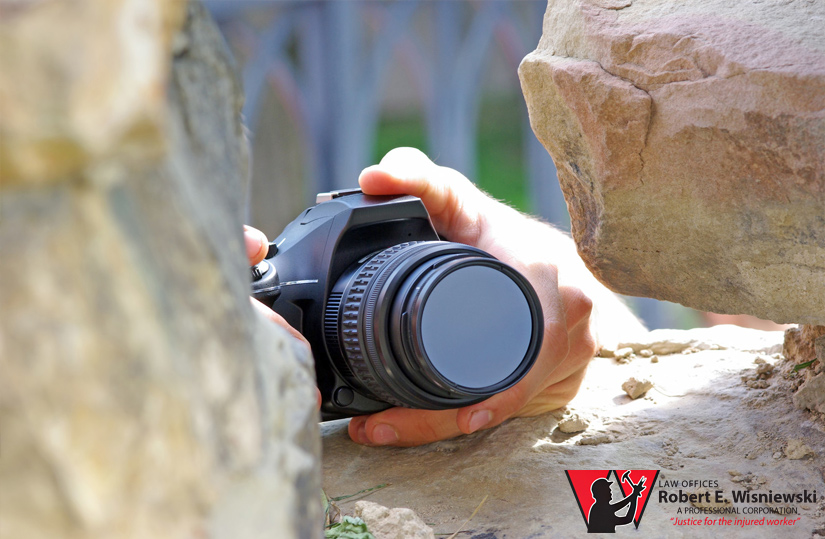 Insurance companies often will obtain surveillance of injured workers. It surprises many people to learn that the insurance company is legally permitted to do this.

Typically, what happens is an insurance company will hire someone to follow and videotape the daily activities of an injured worker. The person conducting the surveillance doesn’t usually interact with the injured worker. However, they may follow the individual for multiple days and at different times of the day.

The purpose of surveillance is to undermine the claim and credibility of the injured worker.

How workers’ comp insurance companies use surveillance (an example)

For example, let’s say you are experiencing neck and shoulder pain as a result of an industrial work-related injury. Your treating physician places you on a “no work” status. The insurance company conducts surveillance on you, and takes a video of you doing strenuous yard work that requires repetitive use of your shoulder and neck — all while you’re on a no work status.

Now, you have irreparably damaged their claim.

The insurance company will now be able to show the video to their physicians to support a finding that your workers’ compensation benefits should end.

Once benefits end, you might ask a judge to review the case. The insurance company will also show the video to the presiding judge at your hearing. The judge will take the video into consideration in order to determine if you require additional treatment.

Other surveillance tactics used by insurers

In addition to video surveillance, an insurance company may investigate a claimant’s social media accounts such as Twitter, Facebook and Instagram. The purpose of surveillance is to gather any and all evidence to show that the claimed injury isn’t as serious as stated by the injured worker.

Injured workers should suspend their use of social media for the duration of their claim.

Avoid volunteering evidence on social media that you may have to explain at a later date.

If you’ve been hurt at work, you shouldn’t have to live in fear of surveillance.

More than likely, it is bound to occur. However, all injured workers have to do is exercise common sense and follow their doctor’s orders when it comes to physical limitations resulting from a work injury.

Contact our experienced work injury attorneys in Phoenix, Yuma and Kingman if you’ve been hurt on the job and have questions about your right to compensation. We’ll make sure that surveillance from an insurance company or a private investigator they hired isn’t used against you to derail your claim.

Many thanks to you and your staff!
Workers Compensation  |  Phoenix
Workers' comp
"I was injured at work in 2009. Over my 10+ years of representation by Bob, I've had multiple surgeries and ..."
T. M., Verified Customer